Reflexology is an extremely effective form of massage, relating to the ‘reflex points’ on the sole of the foot. These points correspond to the organs and systems in the body, and are linked to those organs through ‘energy channels’, ‘zones’ or ‘meridians’. When illness or imbalance occurs, the corresponding ‘energy channels’ become blocked. Reflexology Massage aims to remove these blocks, thus allowing the energy to flow freely again.

Reflexology will reduce stress and tension in the individual, improve circulation and cleanse the body of toxins and impurities. It is also renowned for revitalising the energy, and is often used as preventative healthcare. In other words, this enjoyable therapy will help to balance the whole system.

Reflexology dates back to ancient civilisations such as Egypt, India and China.  There is evidence of some sort of foot and hand therapy being practiced in China and Egypt as far back as 4,000 B.C. It was also practised by the Native American Indians hundreds of years ago, who still practice it today to help with pain relief. This form of therapy was introduced to the West in the early 20th century. 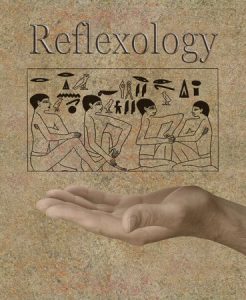 In 1913 Dr Fitzgerald commenced his research into the method of healing which he termed ‘zone therapy’.  Dr Fitzgerald was an eminent physician and surgeon and was head of the Nose and Throat Department of St Francis Hospital in Hartford.  Dr Fitzgerald worked with the hands by applying pressure to various parts of the fingers in order to relieve pain.  He used a variety of appliances to apply firm constant pressure such as clothes pegs or elastic bands which were applied to the finger joints.  Although the hands were mainly used as the area to which pressure was applied, Dr Fitzgerald did discover that pressure could be applied to the toes, wrists, ankles and elbows too.

Dr Fitzgerald discovered that he found zone therapy was effective in 65-75% of all cases that he treated.

A Dr Joe riley became interested in the work done by Dr Fitzgerald but did not actively pursue it, although a lady who worked in his office did. Her name was Eunice Ingham.

Eunice Ingham knew that Fitzgerald mainly concentrated on the hands, but she felt that feet, being more sensitive would respond better. In the 1930’s she began probing the feet-finding a tender spot and equating it with the anatomy of the body, mapping out ever so carefully the zones of the feet in relation to the organs of the body. Eunice Ingham developed her work and compiled all her experiences into two books called ‘Stories the Feet Can Tell’ and ‘Stories the Feet Have Told’.

Eunice Ingham died in 1974 at the age of 85 after devoting a lifetime to aiding mankind with her work in Reflexology.

Reflexology has developed from the initial practice of zone therapy and most practitioners will concentrate on treating by massage to the reflex areas of the feet.  The reflexes in the hands may also be used, but the feet are considered more responsive.

PLEASE CLICK HERE TO LEARN MORE ABOUT THE TREATMENT